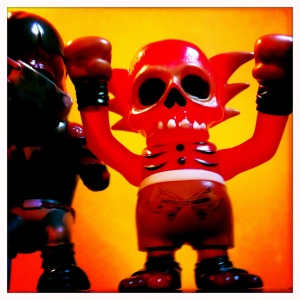 With just a touch of my burning hand
I send my astro zombies to rape the land
Prime directive, exterminate
The whole human race

It’s almost Halloween. Instinctively I play the Misfits a lot more often to get myself into the season. Not that they’re a gimmick band or anything (at least not the original lineup) but October is just the perfect month for it. Spooky movies, which we already primarily watch at our house, are in the rotation more often, stores are decorated with grinning devils and little kids can be seen wandering around in full Halloween costumes for no reason other than that they can.

So as I was cleaning today, Misfits blasting ASTRO ZOMBIES, I decided to snap a picture of the Astrozombies XV Skullwing (with his buddy the NYCC Skull Pirate) for the blog.

It’s a crappy iPhone shot, so it’s a little blurry, but either way… Happy Halloween! 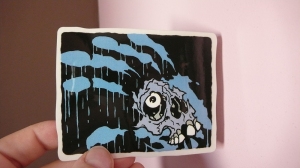 NYCC. An event I dread. But year after year, I find myself in the middle of the chaos, waiting in line for a signing, browsing box after box of discount back issues, or just meeting up with friends and soaking up the admittedly nerdy environment.

The last two years have been worth it thanks to signings/exclusives from Pushead. Last year was my first time meeting him; the culmination of 24 years of Pushead collecting found me somewhat apprehensive. I’ve met most of the artists/filmmakers/etc that I most greatly admire. Some have been awesome (Alejandro Jodorowsky, Kenneth Anger) and some have been very negative experiences (Mark Ryden, I’m looking in your direction). So the idea of finally getting a chance to talk to Pushead left me a little worried. What if he was some rockstar who’s attitude was going to make two and a half decades of collection seem pointless?

As it turned out, he couldn’t have been a nicer guy, actually taking the time to chat with everyone who braved the NYCC to meet him. I walked out of there with a new Skull Pirate and a sense that he really loves his fans. 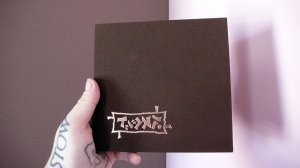 So this year, when I heard he was going to be signing at the NYCC yet again, I didn’t waste any time. I bought a weekend pass so I didn’t have to worry that the day his signing was scheduled for was sold out. I waited patiently for the announcement of which day he’d be there, and when that finally came, booked my bus ticket. I ended up at the bar until 3am the night before the signing. Home and asleep by 4am. Up and on a bus by 8am.

By the time I got to the Javitz center, I was a zombie. Perfect for a Pushead signing!
This was the first year that I went with a single agenda (the signing) and with my level of exhaustion, I really wasn’t having it. I was sort of grumpy, truth be told. I made one or two passes of the convention center, checked out a few vendors and ran into a few friends, then just sort of settled in.

Kirkland from Toybot Studios was really helpful with information; we shot the breeze for a while before I finally settled in at the Toy Tokyo booth to wait it out. Always nice meeting genuine people. Around 2pm, folks started gathering at the TT table- the lucky first tier getting their pre-drawn numbers and the rest of us waiting to see where we placed in line. I pulled 36. Not going to lie, I was a bit disappointed. A handpaint would slip through my fingers yet again…. but hopefully there would enough books and booty sacks to go around. (in line, we heard conflicting numbers on totals) 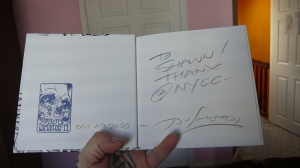 Most of the folks in line were awesome. We shot the shit about Pushead and how we became fans. There was a good mix of kaiju, Skateboard and music fans all lined up waiting for their chance at finally getting to the table. There were a few folks in line who drug a significant other with them to get an extra book/toy, and one guy who had absolutely NO idea who Pushead was, yet got a better number than most of us. His wife was also in line with him. He was a weirdo… screaming at anyone who accidentally bumped into him (which was inevitable, due to the sardine can atmosphere) and giving us the stinkeye. When you see such a limited toy end up on the auction sites…. this is how they get there.

We edged closer, a small group of us still talking and making the time go faster. We got the announcement that the hand paints had sold out, but there were still booty sacks…. and the books had yet to arrive. Yikes!

When my time finally came, I was able to get a sack (with the colorway that I really wanted) and a book, as well as yet another chance to tell Pushead just how much his art has meant to me over the last few decades. Just like last year, I walked away with the feeling that his fans really do mean a lot to him. It totally made the chaos of the day worth it. 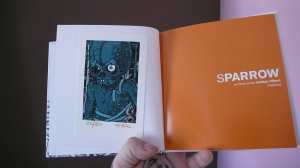 With the book and toy purchased, I made my way out of the convention center. I didn’t even have a chance to open the booty sack and see which version of the Siamese Captain I got; I knew that if I double timed it I could make an earlier bus back to Philly. I finally cracked open the Sparrow (which makes #4 for me- two regular editions, one MELT tip in and now the brown slipcase version) and saw the giclees, sticker and personalization.

I decided to wait on opening the toy, which came in an awesome Skeletal screenprinted bandana, until I got back to Philly. With the high of getting both the book and the toy, of meeting so many awesome pieces and having a chat with Pushead, I wanted to have one last thing to look forward to.

The bus ride home was quick; despite not being able to sleep I at least rested, getting back to Philly exactly when I needed to be back instead of a few hours late like I was scheduled for. 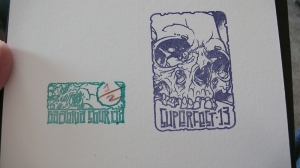 I finally untied the bandana and got a chance to look at my Siamese Captain; it was exactly the color I wanted. Word was that the piece had a production run of 40- four colorways x 10/e. I’ve still only seen three of the four released, so I’m hoping that folks get motivated to share their pictures in the coming weeks.

In the end, the whole day was exactly what I wanted it to be… still need to get an elusive HP though! 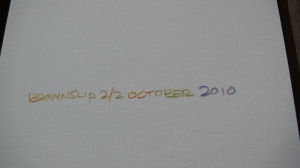 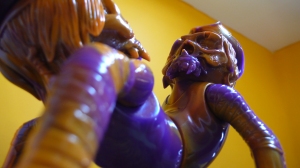 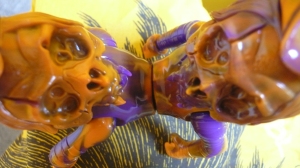 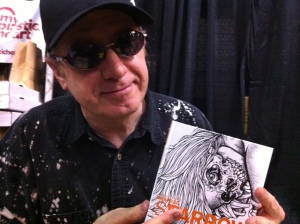 Whew. Talk about a whirlwind. From Philly to NYC to Philly in under 12 hours. My NYCC2010 experience made for a hell of a day.

I’m going to do a full update tomorrow; Pics and a writeup. For now…. A pic of the man himself.

I’m heading to the Pushead signing at the NYCC tomorrow. Due to scheduling, I can only stick around for the Toy Tokyo portion and not the IDW Sparrow signing. Oh Well. Bringing some $$ in case I make it in time for a HP. If not… hoping to pick up at least one of the convention exclusive goodies. 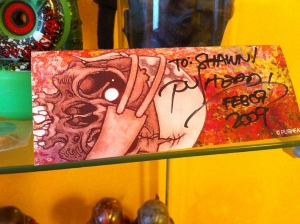 NYCC 2009. I waited forever to get the event-exclusive Skull Pirate and meet Pushead. After being a fan for so long it was great to meet a totally humble, totally nice artist who’s politeness was equal to his talent. I wasn’t able to get a handpaint, but I managed to get the Pirate with a signed header.